Believe it or not, this odd prickly creature, which lived during the Cambrian era, is a primitive echinoderm: 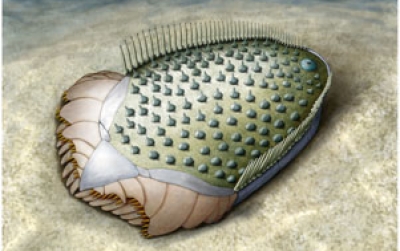 Echinoderms (starfish, sea urchins, sea cucumbers, crinoids, etc.) are well-known for their pentamerous (5-fold) radial symmetry. ...Many living echinoderms pass through a bilateral larval stage, evidence for the well-worn adage "ontogeny recapitulates phylogeny" (also known as the Biogenic Law, which as a general hypothesis is now largely unaccepted). However, no fossil evidence - that is, an actual bilateral echinoderm - has ever been found (although a few asymmetric fossil echinoderms are known). Until now. Samuel Zamora, of The Natural History Museum in London, and colleagues have just described Ctenoimbricata spinosa, a new genus and species from the Murero Formation (earliest middle Cambrian Period) in northeastern Spain.